I wanted to post up an experience to save others time in the event they replace their starter and find the starter gear not engaging the flywheel.

My starter bendix went out on the 340 Cuda this weekend and no biggie, just ordered another hi torque mini-starter from Oreillys.

installed the starter and while the pinion shot out as expected while key in start mode, it would not engage the flywheel.

I started down a long path of battery, wiring, etc and ran out of idea. I then noticed the top mounting hole (bottom hole in pic) to trans on the starter, has A LOT of gap between bolt and housing like a 1/4 play. Hmmmm. I had already taken the starter out 3x and no change but this time I lightly ran the bolt closest to the ground in and got the top bolt started, then wiggled the starter as much as I could assuring the snout was in the bell housing hole (push towards rear of car) and starter pushed towards the converter as much as possible.

i held out little hope this did anything as the starter did not seem to change position...but sure enough WORKED LIKE A CHAMP.

I think because the pinon gear teeth are only 1/4 deep on the starter and the top bolt hole in starter is a 1/4" gap between bolt and hole, there was enough slack to gap away from the converter despite there being a bell housing starter snout mount hole.

Hope it saves some one frustration in the future. 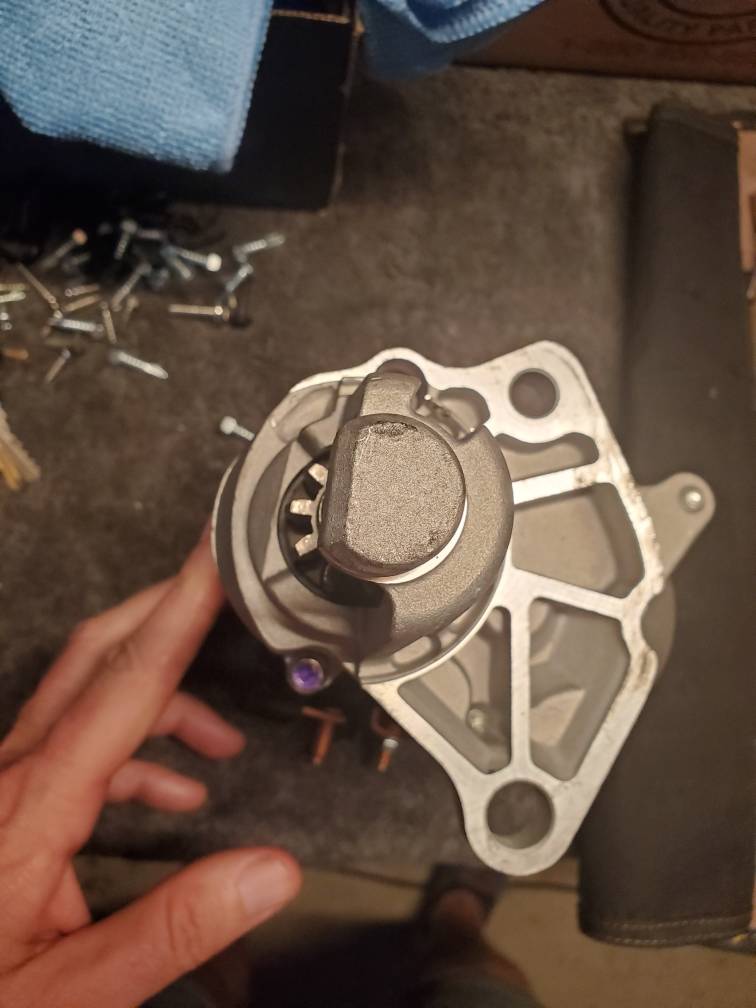 In the very near future [Weeks] I want to replace my starter with the smaller mini-starter. Very much appreciated. Guys like you make this site great! Thank You!

Thanks for the post, as challenger rta said,
I Just have a question here, why is the hole that much bigger? Is it designed to work with different bell housings? Would there be a chance for the starter to get dislocated after a while?
(Ok 3 questions

Sounds like you are not using the factory mounting hardware. You are supposed to have a stud installed in the bellhousings lower mount hole and a bolt in the upper hole. This would locate the starter with the stud before you installed the upper bolt.

moparleo said:
Sounds like you are not using the factory mounting hardware. You are supposed to have a stud installed in the bellhousings lower mount hole and a bolt in the upper hole. This would locate the starter with the stud before you installed the
Click to expand...

moparleo said:
Sounds like you are not using the factory mounting hardware. You are supposed to have a stud installed in the bellhousings lower mount hole and a bolt in the upper hole. This would locate the starter with the stud before you installed the upper bolt.
Click to expand...

That's what the big Question mark is,that popped up my head! nuts and bolts! I should have caught that! Thanks!

Only in a perfect world there is no Trial and Error. So I'm not the only one with busted knuckles. I Love it!

I know that I sound like a broken record but most of the posts that I read on all Mopar sites are answered in the Factory Service Manual. Just most people don't bother to use it. Probably just like most people never read the instructions that come with things they buy and then can't figure it out. Just read the instructions. They are there to help you,, not to be a challenge to you...