Anyone ever hear about a "Turbine Dart"

Anyone ever hear about a "Turbine Dart" that raced back in the day?
Looks like the Turbine Dart was raced on May 1, 1966 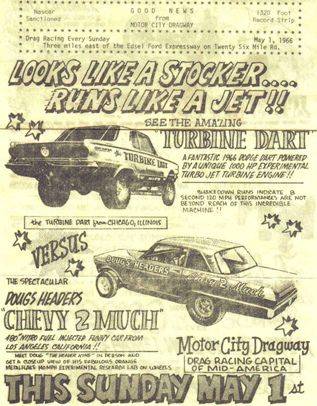 Paharamia, I can't even imagine where you find this stuff....
Always delighted though!
So did the Chevy2much have a chance?
Last edited: Jan 14, 2019

Dave Lyall wa a teen-aged member of the Tappet Tickers in 1956, a Michigan Hot Rod Association-sanctioned Hot Rod Club, The dues paid by club members was used to fund the purchase of sixty acres of land in New Baltimore, in Ira Township. Club members were also required to work at the track site to get it ready for construction. The track finally opened in the summer of 1957, with very primitive facilities, including a pnenumatic timing system. Races were started by a flagman. The timing clocks were operated with an air hose attached to a hand-held pole under a front tire of the race car, starting the clocks (an official pulling it away from the rear tires after the launch so it would not get damaged) and another air hose crossing each lane of the track at the finish line, which stopped the clocks. Later additional air hoses were added at the finish lin to facilitate recording speeds. An official stood at each side of the finish line with a flag. The official in the winner's lane raised his flag to indicate to the officials and spectators which lane was the winner. At this early date, the strip was called the MHRA Drag Strip. Ads gave its location as Gratiot and 26 Mile Road, but newspaper articles clarified it as being six miles east of Gratiot Road. It was just south of today's Marine City Highway (26 Mile Road) and on the west side of Meldrum Road. At an April 19, 1959 race, Harold Smith of Masillon, Ohio, was top eliminator in his blown Chevy dragster with a 132 MPH and 10.68 ET. Connie Kalitta was second fastest with a 126 MPH, 11.48 second run. On May 17, 1959, another fast car from Masillon, Ohio, broke the track record. David Pearson, at the wheel of the "Blue Angel" dragster turned 136 MPH. In 1963-64, ads were calling it International Raceway Park, "the racer's drag strip." In 1965, it was named Motor City Dragway, sanctioned by NASCAR. They began running at nights under lights in 1965. On May 20, 1967, Dick Sawallich was killed at the track in a racing accident. It was listed in the January 1969 issue of Hot Rod as a sanctioned NHRA track.

My research showed a lot of hype for races with Mopars against other makes.

Grand Spaulding Dodge was in match races with Nicholson's and Schartman's Chevys back in the day at this race track. It became a NASCAR sanctioned racetrack in 1965.
Check out this website; with the write- up about Motor City Dragway! 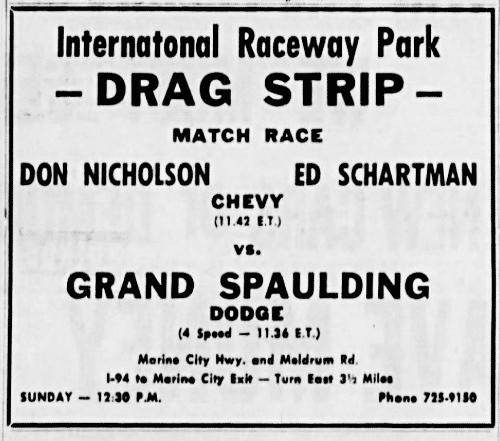 Track was called International Raceway Park before it was renamed Motor City.

My favorite ad for this track; Admittance to the races for 90 cents! 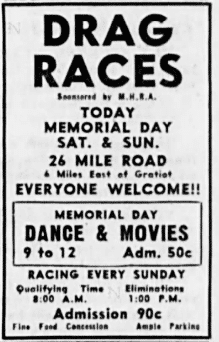 And videos for the road; Charger racing in 1968 and some other races

The Dart probably had the same turbine engine that were put into the 63 Chrysler Turbine cars that looked like T Birds?

Fun stuff and interesting history of a Mopar

Good ole times in the Motor City area! Thanks Phil

The remains of "Motor-City-Dragway" are about 10 minutes from my home. I raced there as a kid, all the time.

I was thinking that Dart had a Turboniques turbine rear axle maybe.

The search engine that helps you find exactly what you're looking for. Find the most relevant information, video, images, and answers from all across the Web.