Not quite sure about the year, but the od unit which replaced the 727 was the 518. Essentially a 727 with an od tailhousing.

what do i need to do to install this trans in my 73 challenger and to make it work i picked up a 1990 518 .i know i have to shorten the driveshaft 3.5 inches.what else would i have to do

Modify the floorpans, the torsion bar mount, and the trans mount.

Buddhascuda said:
what do i need to do to install this trans in my 73 challenger and to make it work i picked up a 1990 518 .i know i have to shorten the driveshaft 3.5 inches.what else would i have to do
Click to expand...

You do not have to touch the floor pan or the torsion bar mount.

You need a transmission cross member (you can buy these now) and two simple modifications to the outside of the A518.

I did it and I have no skills to speak of.

It's the best thing I've done to my car.

Just one of many articles

Converting your A-727 Chrysler transmission to a gas-sipping overdrive 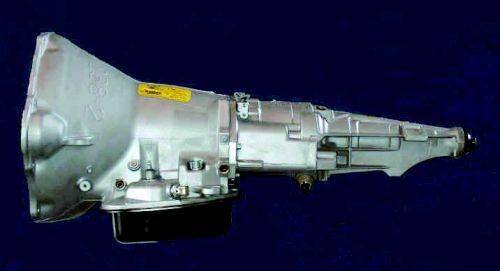 With gasoline prices teetering around the $3 mark, it makes sense to replace your old automatic transmission with a more modern overdrive unit so you and your car won't have to visit the pumps as often. In previous articles, we've touched on the use of an overdrive transmission to replace Ford and GM automatics. With the introduction of the A-518 Chrysler transmission in 1990, it's possible to perform this conversion with many Mopar, 1972-'78 AMC and two-wheel drive Jeeps that were originally equipped with a Chrysler 727 transmission.
The A-518 is also known as a 46RH transmission and was used extensively by Chrysler in the early to mid- '90s as a replacement for the A-727. It is the heavier-duty cousin of the A-500 overdrive, typically used behind V-6 engines in the mid-'90s. However, the A-518 is based on the A-727 and they share some things in common, which makes this conversion relatively easy and an economi cal alternative to converting to a different rear end or to a five-speed manual transmission. With an overdrive ratio of .069:1, the A-518 may save you up to 30 percent in gas mileage at highway speeds, but it also reduces wear and tear on the engine because it's turning 600 fewer rpm while in overdrive.
A later version of the A-518 is known as the 46RE, with E designating electronic. This computer-controlled transmission first appeared on 1996 models. The first generation 46RH transmission controls were hydraulically activated similar to the A-727 in appearance. Internals are different, however, and not many components are interchangeable. The overdrive gear was added to the tail shaft, explaining the longer tail shaft than the A-727. The A-518 also incorporated other internal upgrades. This transmission came in both two-wheel drive and four-wheel drive configurations but there is plenty of work involved in converting from one to the other, so we recommend you find a unit matching your existing drivetrain. Our article this month will focus on conversion to the 1990-'95 two-wheel-drive units. Gear ratios are as follows: first gear, 2.45:1; second gear, 1.45:1; third gear, 1.00:1; overdrive, 0.069:1; reverse, 2.21:1.
This transmission and the A-727 use the same 14-bolt oil pan and the oil screen inside the pan also is identical. This makes identification a little more difficult when the unit is removed. In this case, a tape measure comes in handy. The A-518 will be about 38 inches long, whereas the A-727 is about 35 inches. Also, the measurement from the block flange to the transmission-mounting block is 24-7/8 inches on the newer transmission instead of the 23-1/2 inches that was standard to the A-727. The 46RH transmissions that were used from 1990-'95 have a three-pin electrical connector on the driver's side of the transmission which controls two solenoids, the overdrive solenoid and the torque converter clutch solenoid. These two units are mounted inside the valve body on one common bracket. The 1996 and up model 46RE units have an 8-pin connector instead of the 3-pin, and are less desirable for converting into a non-computerized vehicle.

You can locate the A-518/46RH transmissions in these donor vehicles:
When finding one of these units, it's wise to take the shifting linkage in the case of a column-shift vehicle or the floor shifter because linkage on the A-727 is not exactly the same as the A-518 and requires modification. The six-spline yoke on your existing A-727 driveshaft is the same for both units, although your existing driveshaft will have to be shortened about 3-1/2 inches to compensate for the longer tail shaft on the A-518. You'll also need the torque converter, which is of a lockup design. You cannot use your existing A-727 torque converter for this swap. Both transmissions used the standard Detroit 7260-style universal joint (Spicer # 5-1306X) on the front of the driveshaft. Rear U-joints would be the same unit for a 2-1/8-inch pinion yoke or could also be the Detroit 7290 series U-joint (Spicer # 5-1309X) if you have a 2-5/8-inch pinion yoke on the rear end. The starter and the flexplate are shared units, saving you time and money. The cross member will need to be modified, by cutting off the end sections of the crossmember and the fabrication of a new center section to compensate for the lower mounting location on the A-518. You can use a GM stud-type transmission mount (#10473052) to fabricate a crossmember that would have less offset than it will with the taller Mopar mount (#52019615).
What about the three wires hanging there? The overdrive and the torque converter lockout won't work unless you hook them up. Install a toggle switch on the dash and run the hot wire to the center pin on the 3-pin connector (the two outer connections are ground for the TCC solenoid and the OD solenoid) and run the two ground wires to the brake light switch. A more efficient way of doing it has been devised by Performance Automatic Transmission Center in Bossier City, Louisiana. Install a vacuum switch and two oil pressure switches, which allows the overdrive to engage before releasing torque-converter lockup. PATC's design calls for installing a 7-pound normally open vacuum switch, similar to those used to drive an hour meter, to a direct hot wire (with an inline fuse) off of the ignition switch. The hot wire out of this vacuum switch will run to the center pin of the three-pin connector. The vacuum switch will allow you to engage the torque converter lockup and the overdrive solenoid, if engine vacuum has reached seven pounds. It will also disengage both when you kick the throttle up and engine vacuum drops below 3 pounds. This allows you to revert back to third gear to pass a car or help the vehicle negotiate a hill. If you install two oil pressure switches, this will fine-tune the speeds at which the torque converter lockup engages (this keeps the transmission running cooler) and when the overdrive solenoid engages. These are installed in a pipe tee in the governor pressure tap, which has a pipe plug in this hole from the factory. This is on the passenger side of the transmission case, on a thick mounting rib, just below the upper tail shaft mounting bolt.