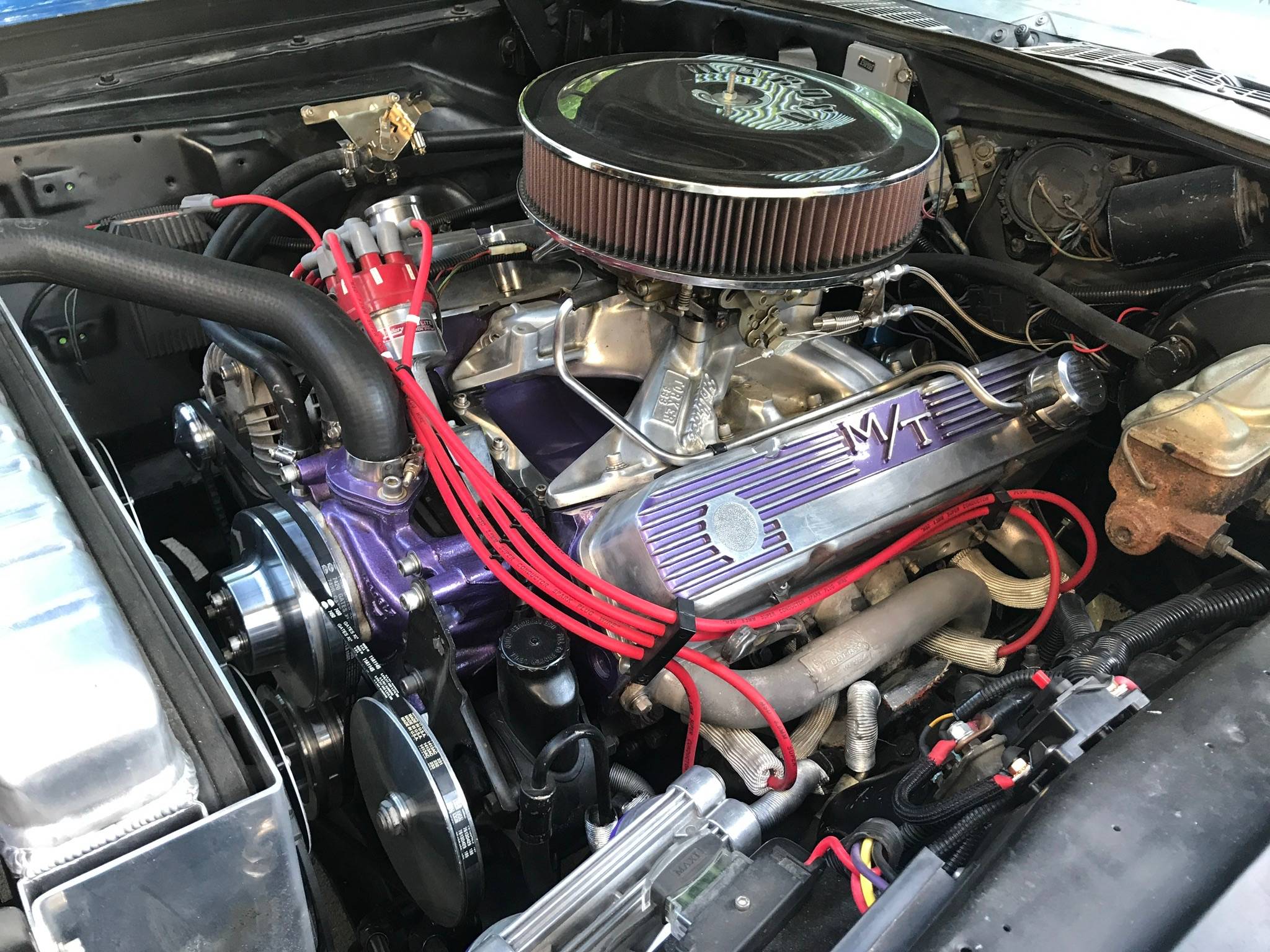 This ‘70 Cuda was originally yellow with a black vinyl top. When I bought it in 1987 the previous owners had their way with it. Some original engine parts and the A.C. were missing and it had been hit pretty hard a couple of times. Over the years the Cuda would go through several attempts to make it a viable hot rod. Money usually ran out before I would get very far.
About 1991, I had just enough money to pay a guy to do a crappy blue paint job with the ugliest light blue stripe I’ve ever seen on a Cuda. At least it protected the sheet metal.
Fast forward to present day, the ol’ 383 has been freshened up with all the good stuff. The 727 is fresh as well with a Gear Vendors overdrive hanging off the end. Out back, an 8-3/4 with 3.91’s.
Getting the Cuda running and on the road was a major step. Now it’s time for paint. We completely disassembled it and now it’s at the paint shop. Looks like we’ll have it in our hands around the first of the year.
As progress continues, I’ll update with more photos.
We are down to the final blocking and wet sanding. Next up is Lizard Skin heat and sound insulation and then on to color.
While the body is at the paint shop, I plenty of time to get all the other components ready for installation. A little paint and the rear end is ready to spin and stop some wheels.
3/18/19 Update: Huge progress has been made. Two weeks ago the interior was sprayed with Lizard Skin sound and heat insulation. A week ago the first color was laid down on the engine bay and belly. And the exterior got the first coat two days ago. Still a ways to go, I’m thrilled to see Plum Crazy on the Cuda. That dream is getting closer to reality!! More updates soon.
3/30/19 Update: Today was the biggest day so far. We rolled the Cuda on a trailer and brought it home!!!! Now the real fun begins, the assembly process. The updates will come much quicker with the Cuda in our hands.
7/14/19 Update: So much for quicker updates. Summer has arrived and all the things that go with it. Vacation is out of the way, now it’s full on ‘Get ‘er gone’ !!! Rear suspension, dash and most of the front suspension were bolted on this weekend. Really cool to see some big parts get installed. As always, more updates later.
7/26/19 Update: We are making progress every day, getting close to dropping in the engine and trans. Fuel lines, brake lines, and electrical are just about done. I’m thrilled with how well the process is going. Keep checking in, engine photos soon.......
8/25/19 Update: Big day yesterday, the engine and headers fit perfect. The new QA1 K member makes things much easier to install. The ol’ 383 looks pretty nice in there. The trans and Gear Vendors O.D. are next to go in. And then on to all the things that make it go.
8/26/19 Update: Here’s part of the go, we set the cherry on top to see how it looks and WOW!!! Hope it runs as good as it looks!! More go stuff coming up.....
9/14/19 Update: Another big day, the trans and G.V. were bolted in today. Driveshaft and exhaust are next. Still lots to do, lots of details, we can see a flicker of light at the end of this very long tunnel. And then we make some noise!!
9/29/19 Update: We’re making steps forward every day. Hit a snag with the age old problem of header/starter clearance.The cooling system was buttoned up a few days ago, happy to see no problems there. Wiring is getting closer to complete, a major project marrying old and new harnesses. There’s light at the end of the wiring tunnel also.
11/9/19 Update: Finally solved the header/starter clearance problems. Bolted in the shocks a few weeks ago. With the exhaust in place, we’ll button up the steering tomorrow. We bumped into a few leaks in brake system, should have them plugged up soon. Gettin closer, with the holidays approaching, progress will likely slow a bit. As always, I’ll keep updating as we make head way.
11/10/19 Update: We buttoned up the steering today and the suspension is complete, another big step done. Rear valance and exhaust tips are next, gonna be a little tricky but we’ll get it done right.
12/4/19 Update: Starting to get the details checked off the list. Hope to get the brakes wrapped up this weekend. Really looking like a Cuda with the header panel bolted on. Still a ways to go on the wiring, that will be the last major step. We’re going to leave the exhaust tips to the pros at the fab shop. More updates later.
3/23/20 Update: Things pretty much hit the fan right after the Holidays. My best friend and chief wrench had major heart surgery and is still recovering. He’s getting better and gaining strength every day. The business of life has hit me head on and have been dealing that crap. Finally getting a little clean air in front of me and I’ll get back to the Cuda. We did get the deck lid and spoiler installed and some other details buttoned up. Still a was to go, as always, more later.
9/20/21 Update: A year and a half later, a new home on California’s north coast, the whole f*#king COVID thing, and retiring, I finally have time to make some serious progress on the Cuda. The door glass and quarter windows are in, new grill, electrical is very close to complete, fabricating the mounts for the new seats and lots of small details off the list. Testing the electrical system and interior are next. More updates, sooner than later…..
Share:
Facebook Reddit Pinterest Email Share Link

Fishgutz
Many thanks for compliment, we hope to get it fired up soon.
Read more…

Very cool. Those gutted trunk/rear end pics made me shudder...
Looking good with work being done. I'm going through the same thing with mine. Keep us posted with more pics!
Hey Guys, thanks for the encouragement.
Nice Cuda
and the work is coming along nicely!
Can't wait to see how it turns out!
Finally ready for the last coat of primer. Color next.......
Big step accomplished this morning. The last coat of primer. Some final blocking and it’s on to the pretty stuff.
Nice car! Lookin' good!
Don’t know how anyone could choose a blue car
LOL
Love it
Happy motoring

Knock Out said:
Don’t know how anyone could choose a blue car
LOL
Love it
Happy motoring
Click to expand...

Look now, not blue anymore!!!
Love it !!
You can't go wrong with a 1970 Plumb Crazy Cuda.
Wow you have done a great job with your Cuda...love the color.
I am looking to install the gear vendor overdrive on my challenger. I also have 3.91 gears and a 727 tranny..what can you tell me about it..thanks and again beautiful car

I highly recommend going through a G.V. Dealer, beware of used units. G.V. will customize the unit to match your setup. Hope this helps, keep me posted on your progress.

Also plan on doing work to your exhaust system. You’ll probably have to move your H or X pipe back about a foot. And you’ll have to massage the trans tunnel a bit. Good luck.
Thanks for the info.
Pay close attention to your driveshaft angle also. It can get tricky.
Nice work! Well thought out project, I can really appreciate the time and effort you put into that build.

Cuda525 said:
Nice work! Well thought out project, I can really appreciate the time and effort you put into that build.
Click to expand...

Many thanks for complements, all it takes is cubic dollars!! And a lot of time. I’ll update after the weekend’s progress.
Keep your head up! It will come together as life throws us curves. It's really looking nice!