May the people of good conscience do the thing that they do! 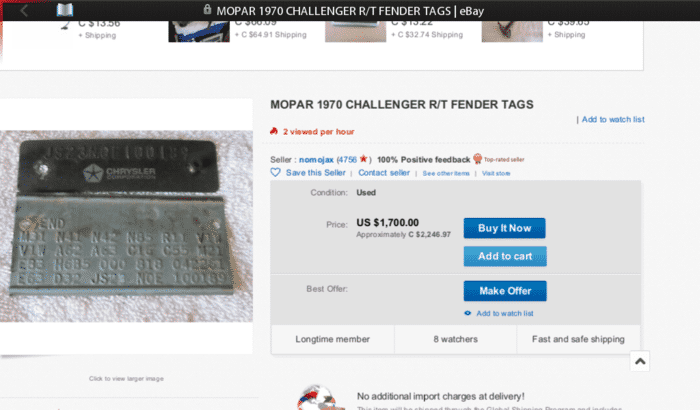 I'm pretty sure that's illegal...
B

That's only the half of it, more importantly, it's dishonest!

Illegal if someone uses those tags on another car.

Sad. That was a very early RT Challenger with an August 18 SPD and a 189 production sequence number!
A

Nobody is going to spend this sort of money to use it as wall art this is a crime in progress and eventually there will be a victim. I tried to send a link to the Ebay listing to Barry Washington but something is wrong with his email.
Last edited: Jun 24, 2019

So, if someone says "Meh" does that mean it's "okaaay"?
A

The law about this subject varies from state to state but California (where this is for sale) seems to be more strict then most about this sort of thing. I don't think you are even allowed to remove the VIN unless under supervision from an approved person, there are some other conditions but this is not one of them. I have forwarded it to Barry I don't like this type of thing it encourages criminals and someone is going to get ripped off sooner or latter. Maybe someone's 1970 Challenger will be stolen now some low life has access to these tags. 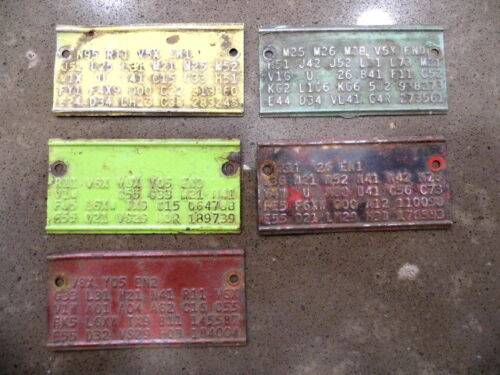 When someone says "Meh" it means they don't get why so many of you guys get your panties all in a bunch when someone sells VIN & fender tags. Is YOUR car a fraud? No? Then why worry about someone else's business?
A

Some people probably thought the same when Hitler invaded Poland, if we turn a blind eye to this sort of nonsense before too long there will be more messed up cars then real deals.
B

Meh...., I am just checking my panties, it looks mighty fine... , not bunched up or even wrinkled, actually looks good, in principal I mean.
It's good to have principles.

The real issue is that this type of action hurts all of us and our hobby in the long run.

There are many fraudulent individuals who have no scruples about using these documents/tags to build something that is a fake. Unfortunately, there are still some people who are not well informed and get scammed.
As our cars become more rare, the incentive increases for fraud to take place.
High dollar, low production cars are more scrutinized when a potential buyer looks to fully vet a possible purchase; but the potential is still present.

One of the benefits of being a member here or other enthusiast sites; word gets around about specific tags/serial numbers/build sheets that get sold. This keeps the information out in the public forum and helps to reduce the possibility of someone getting scammed.
Barry Washington maintains a section of his website that flags potential VINS of cars that may have been parted out. Valuable information IMO
Knowledge is always power.

A lot of people, including the great and mighty Barry, seem to be experts on the law, yet hold no degree. Let's say someone decides they don't like you or your car and they call Barry, and Barry gets all wound up and "calls local LEOs", like he's always threatening to do. I, personally, don't want cops all up in my business, looking at the numbers on my car. Is it because my numbers are fraudulent? No, it's because I EXPECT a level of personal privacy on my own property.

Anybody hear about the guy selling a front clip on his own front lawn that happened to still have a fender tag on it? Yeah, well, that guy got the cops called on him and he had a pretty bad day because some nosy Nellie from another state (ALASKA??) decided it "was illegal".

Don't like the stuff being sold on ebay? Don't buy it. Obviously, it doesn't violate their rules of selling or it would already be gone. Want to spout off about"the law"? Get a degree. Maybe get one for every state, since the laws vary from one to the other.
B

Thats so funny, Al Capone said exactly the same thing when the coast guard raided his boat in the middle of the night, while carrying alcohol on board.
Just to keep things simple, at a level that I can understand, I would say let's not consider the legality of the matter, since my degree is not in law, for one moment let's say there is no law, would it be okay to buy stolen goods?,would it be okay to steal?, would it be okay to screw somebody over to make a buck? Worst of all (imo) is it okay to lie to other people to make money, like conducting business by telling lies to make money?
You know what, don't anybody answer that, I don't want to be disappointed by the characters that frequent this site.
Thanks in advance!

A little light reading for anyone interested in this topic:

This is from the Legal Information Institute at Cornell Law; a statutory source I referenced professionally before retirement;

I'm thinking some low life may see these for sale and knows where some guy has a 1970 Challenger that is not too hard for them to steal, then they take that car to another scum bag who paints it so the owner will not recognise it, they restamp the engine and other partial VIN's and then they have a car to sell. Point is if these tags weren't available none of this would have happened.
B

aussiemark said:
I'm thinking some low life may see these for sale and knows where some guy has a 1970 Challenger that is not too hard for them to steal, then they take that car to another scum bag who paints it so the owner will not recognise it, they restamp the engine and other partial VIN's and then they have a car to sell. Point is if these tags weren't available none of this would have happened.
Click to expand...

" and then they have a car to sell"
Yes and at a much much higher price! That's the whole point!

budascuda said:
" and then they have a car to sell"
Yes and at a much much higher price! That's the whole point!
Click to expand...

They only have to get more then they paid for the tags and paint job to turn a profit.
VIN rivets are ok because when you fit a reconditioned dash pad during your restoration you need them to do a good job when transferring the VIN to your new dash pad.
You must log in or register to reply here.
Share:
Facebook Reddit Pinterest Email Share Link