Thx in advance. I need to replace the rotted out gas tank fuel separator like in the pic below that has the 4 lines running to it but....anyone know who sells these?

I tried Classic Industries and a few other sites but no dice. 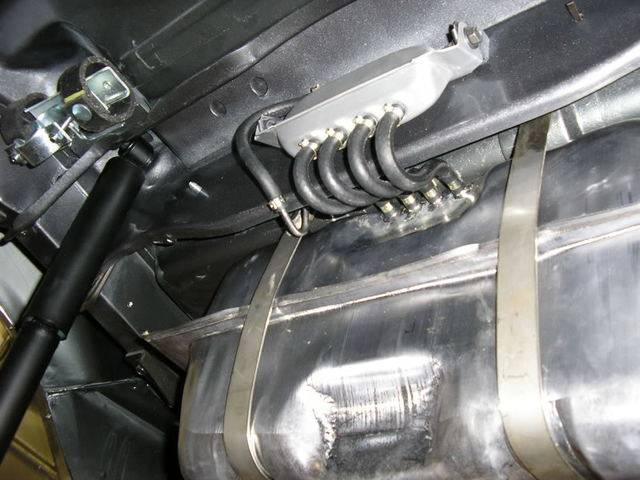 There is no other vent that Im aware of, so do you know if I just plug 3 of the 4 vents and run the last one up and out to safe area perhaps frame rail?

Yes you can do exactly that.

Those aren't reproduced. If you want to get rid of it, loop the four vent nipples coming out of the gas tank to each other with a couple short sections of hose and then use a vented gas cap. Mine was running fine that way for several years but over the winter I'm restoring the fuel vapor separator and putting it back in use because it actually does what it's designed to pretty well.The issue with the vented cap is occasional fuel spilt down the side of the car. It's not a huge deal but it get's old.

On a Cuda the gas will come out the back under hard acceleration if the cap is not sealed. If the cap is vented and sealed it won't be all that much but it could still suck a bit. On my Cuda I put a vent into the fill tube in the trunk and ran a line across the back and then up towards the pass side rear tire dumping down behind the rear tire under the trunk floor extension. The thought is that vapors will be able to expand and find their way out but fuel won't, but if it does it will dump under the car.

Maybe you can use one from a 70 Cuda.