This Barracuda is my second one. When I bought my first one I was actually looking for a 67 or 68 Camaro, I was pretty much a Chevy guy all the way. I had a friend that was a car salesman and I told him what I was looking for and he said "I have a Barracuda in the back that we just took in trade." I went back and looked at it and it was pretty solid but rough. I loved the Challenger in Vanishing Point and thought "Well, I can fix it up and if a Camaro comes along I'll sell it and buy the Camaro. He said they wanted $700 for it and I offered him $500. He talked to his boss and he told him "Let him have it for that." That car is what started my Mopar journey, a trip I've been on for almost 40 years now. I've never owned another Chevy since I bought that Cuda!

Fast forward 10 years, I'm much better financially and I have a 1958 Chrysler 392 Hemi in pieces sitting in my garage that a friend gave me. I started rebuilding the engine and looking for a B or E body Mopar to put it in, and I ended up buying a 1970 Barracuda Gran Coupe from a guy in Bakersfield for $1500. It supposedly didn't have any rust. Two quarter panel skins, a trunk floor, a dutchman panel and a left front fender later, it finally didn't have any rust!

The 392 lived in the car for several years until I decided to swap a GenIII 5.7 Hemi into the car. I had gotten the car repainted the same Ivy Green as the first car. The Gran Coupe had originally been yellow and there was no way I was repainting it yellow! The car was not even close to being original so I had no problem changing colors. The guy that painted it made it look amazing but he somehow screwed the prep up and with in a couple of years the paint started cracking and lifting. After a while it got so bad I just parked it, I was embarrassed to even drive it. These pics show what it looked like.

After 3 years of being parked I decided to get it running again. I had to rebuild the carb, and the cable on the B&M shifter was froze up. I managed to get it worked loose enough to get the car into 3rd and reverse and got it home. That last pic in the previous post is when I got it home. I put a new shifter in it and got it running like it was supposed to and took it out and drove it a little. That got the bug going again and I started looking into getting it repainted. I knew it was going to have to be stripped to the bare metal and I wasn't in a rush to do it myself or pay someone else to do it, so the car sat in the driveway for a few weeks. My wife finally told me "I'm tired of looking at that car like that, just get it painted and be done with it. You might as well get new carpet and seat covers while you're at it!" That was all I needed to hear!

I had an old Rally hood that I had picked up years ago to replace the flat hood with the fiberglass Six Pack scoop that I could never keep from cracking around the flange of the scoop. I didn't realize just how bad that hood was until I bolted it onto the car, that thing was bent up bad!

I was going to DA all the paint off myself to save some money but at 66 years of age I was having a hard time getting motivated to do it. My wife knew this and that was one of the reasons she told me to just go ahead and take it to a shop and get it done.

I had talked to my old boss, who was also into classic cars, telling him I didn't want to pay for a show car paint job, I just wanted a nice driver job. He recommended a body shop just across the border in Palomas, Mexico. We only live 30 miles from the border. I knew John was pretty picky about his cars and he told me that the shop did really good work, and the owner was actually a U.S. citizen. I called Victor, the owner of the shop, and he came by the house and looked at the car and gave me a quote. When I pointed out the hood he simply said "We can fix that! We'll cut out that rust under the scoops and weld new metal in too."

I pulled the grill out myself and put it away in the garage, it was the original and I didn't want anyone else messing with it. That old plastic is kind of brittle! A week later the car was sitting in his shop in Mexico! He showed me a 1966 T-Bird that he had just finished that was awesome looking. He said he was waiting on the owner to come down from Denver to pick it up! I walked out feeling pretty good about my choice of shops.

They sanded the whole body down to bare metal and fixed the hood. I was petty impressed with how the hood was looking when I got back down there!

About two weeks later Victor called and told me the car was in primer and wanted me to come down and look it over.

He said they were going to start blocking everything and I went down one more time after that to see if everything was looking good for me. It was, and a few days later Victor sent me this pic;

For the first time in years my car was actually looking good!

This is what the car looked like when I got it home.

And here it is after getting the grill back in, the hockey stick stripes on, and the wheels polished.

I got the new carpet in but I'm still waiting on the seat covers. It seems they are 3 or 4 months out on orders.

We have a local 'Cars in the Park' car show coming up the last weekend of this month and I'm going to go ahead and enter it. Like I said, this car is no show car, so I'm not worried about the seat covers. After all, just getting the car out and enjoying it is what it's all about!

Congrats and she sure does look nice

.
It looks like that shop did a great job on the body and paint. And they met their commitments on timing, which hardly ever happens in a body shop.

moparlee said:
Congrats and she sure does look nice

.
It looks like that shop did a great job on the body and paint. And they met their commitments on timing, which hardly ever happens in a body shop.
Click to expand...

That was what impressed me so much, my car was only there for about two months! That's almost unheard of in the States!
F

around what did they charge If you don’t mind sharing? Looks like a job well done!

heminut said:
And here it is after getting the grill back in, the hockey stick stripes on, and the wheels polished.

fk5aar said:
around what did they charge If you don’t mind sharing? Looks like a job well done!
Click to expand...

Did they do any metal work for the 5800? any assembly?

SFEbody said:
Did they do any metal work for the 5800? any assembly?
Click to expand...

If you look at the pics, you'll see that hey had to do a LOT of metalwork on that hood! I don't think there was much else they had to do as far as metalwork went. They pulled the doors. hood, front & rear valances, and deck lid, and painted the jambs on all of them before the final paint work. The engine compartment and trunk were already painted. I had also painted the door jambs at the same time that I did the engine bay and trunk, but they redid them anyway. Victor said that if they saw anything questionable they just went ahead and redid it. 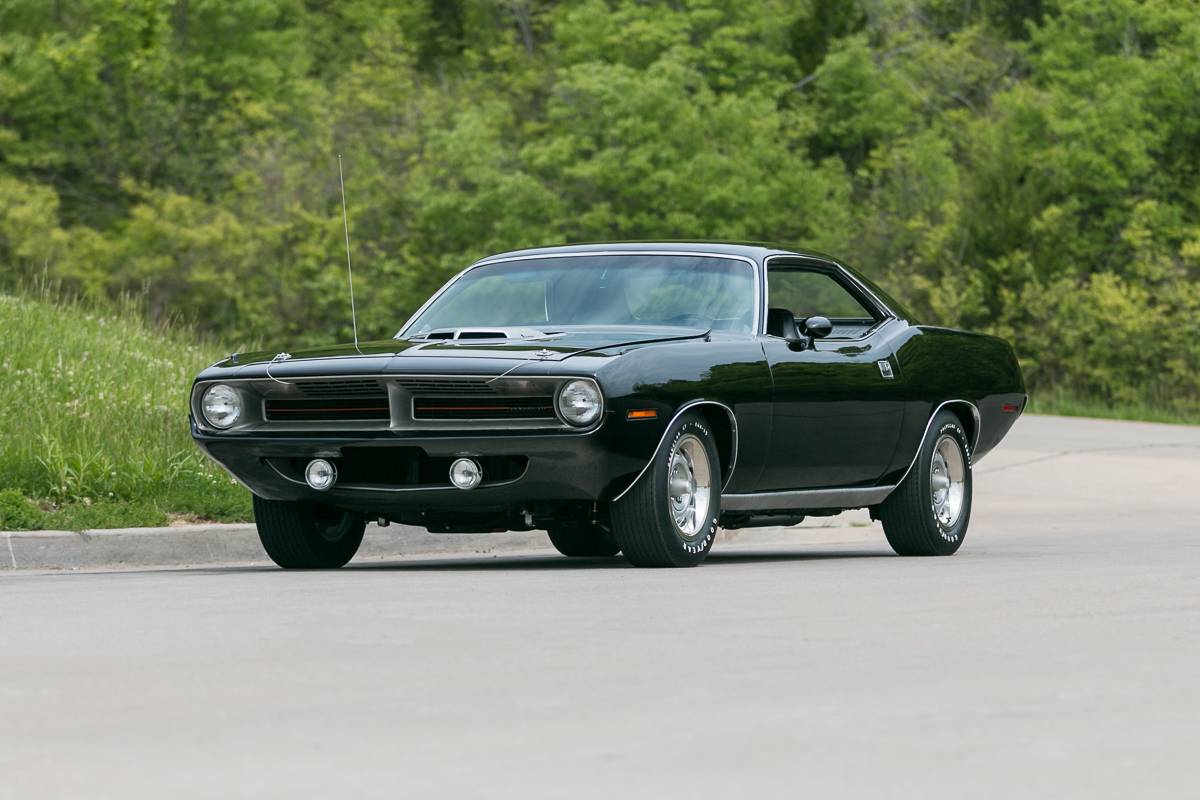 I love a black cuda! Black needs to be complimented with ss trim, chrome, and non-black wheels to look really good like this one. I am not a fan of all blacked out cars.