70 AAR Bringing it back from the accident.

"I can fix it. My Dad has an awesome set of tools."

Had the right rocker area pulled and they pulled the front end back over. Rear pass floor area had a wrinkle. Gone now. Floorpans are solid. Frame guy said she is good from firewall back now. I will replace the rails in front and aprons and radiator support, cowl top has damage and has typical small rust through at base of winshield so gets a cowl top. Hood hinge sliced the cowl top.

HooToTheCore said:
"I can fix it. My Dad has an awesome set of tools."
Click to expand...

Definitely keep those numbers on the radiator support and cowl! those are very important to that car.
That car is what my dreams are made of. Finding one just like that in a garage.
What part of Kansas are you in? Just curious as I look in eastern Colorado and western Kansas every chance I get. Ya never know what;s sitting in some of those old barns and round tops.

Thanks, I'm going to have it media blasted. I'm 64 and have done a lot of rotisserie restorations. Lots of badly rusted ones. This one has typical rust. I know to save all the numbers I can. Since it has original paint, I figured I would have the floors and jambs blasted and sand the rest to metal. Lots of work ahead but I feel better about just blasting the hard to get areas. I'm in kind of central Ks. South of Hays about 20 mi. I appreciate all the info , Like I said it's a learning experience for me as far as what is correct on this car. At least it was totally original when wrecked. So I know what is there is correct. Again thanks and keep looking you'll find one.
C

If you unbolt the pedals from the firewall the pedal will swing further & you can remove it , the other way is to expand it a far as possible & slide washers between the coils to keep the spring expanded so you can remove it in the car
C

Very sad story,someone was watching over your
friend,and also the Cuda ,both are still here.
Good luck fixing the E.
Coco47

Thanks Psycho. I knew there was a way. I have to remove the pedals he bent both the brake and clutch pedals!!

Got the windshield out today and doors off. No surprises other than cowl rusted through in one spot. Needs cowl anyway.

Everything bagged and tagged waiting on blaster. 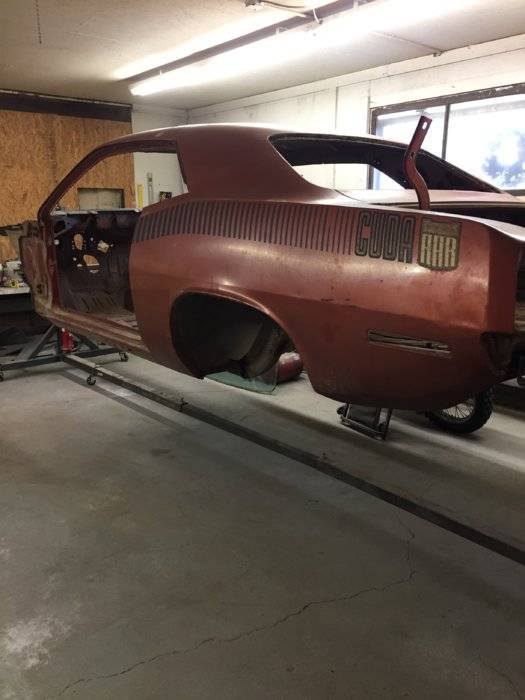 Is this what everyone is using for frame dimensions for a 70 cuda? Oops didn't upload. 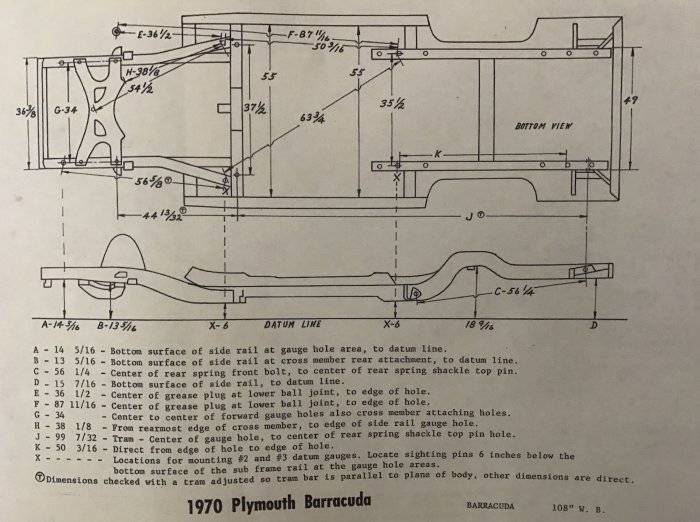 Is that dimension D correct from Datum line to bottom of rear frame rail?

Sorry to hear the story. Glad you are saving it. Cool car. Look forward to seeing the build. Love that color.
M

Torqueflite said:
Is that dimension D correct from Datum line to bottom of rear frame rail?
Click to expand...

Why do you think it is incorrect? It is close to what the front rail is.

Thanks Fasjac. It's coming along.

Moparlee, Because I get the correct measurement at station 1. Correct at 2,3,4 , then at the rear, (D) I get 18 on the rear. Unless I'm goofy. Where the drawing shows the rear leaf spring perch mount is way forward of where these are. These are close to the rear panel. At the rear of the rail where it attaches to the rear panel I get 18. The drawing shows the rails straight, horizontally and vertically. These are curved horizontally and angled rear to front. Now I know it doesn't matter what the drawing looks like as long as the measurements coincide with the positions of the measurements on the drawing. But according to the drawing the rear measurementis taken between the rear perch mount and the end of the rail. That's where I took it. Also took it at the rear of the rail. Same. And both sides are the same. I could understand it if it was a half inch off....but?
You must log in or register to reply here.
Share:
Facebook Reddit Pinterest Email Link