Is a roller cam worth it?

Zinc particles in oil basically act as a sort of soft, sacrificial wear layer. not really as a "lubricant" per se'.
Zinc is abrasive and corrosive (more so in the presence of moisture)
There is a happy medium there. 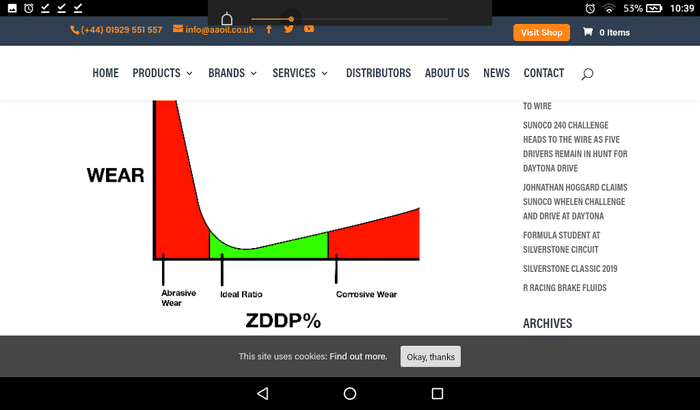 I was in fact surprised to see this chart, apparently too little Zinc is actually worse than too much!

BriceRoad said:
Shaker Joe, thank you very much for the information. I just happened to be looking at Lunati cams yesterday. Your engine is very similar to mine. When I checked my compression I got 9.67:1 but I admit I could be off slightly. I did try to be as accurate as possible. My engine has similar pistons (not sure if they are TRW or Sealed Power), 346 heads, forged crank and stock connecting rods. If you guys don't mind let me back track a bit and tell the whole story:

I got my car Barracuda in 2001. One of the first things I did was get the engine rebuilt. I took it to this guy who told me, (in a Bulgarian accent) " I make you big horsepower". The original cam I choose is the MoPar .474 lift DUR at 0.050"--238/238 and LSA 110 degrees. The builder told me to use a .509 cam. He never mentioned what company. He also cut the deck and heads 0.020" without telling me and bored the engine to 0.030" over. He rebuilt the short block and heads separately. I installed the cam and completed the assembly. Because I had speedometer problems I don't know the exact miles on the engine but it lasted me these 19 years and I would say it has about 15K miles on it. Well, I never got the big horsepower he promised as it just didn't pull hard at all. It could hardly do a burnout. The pro was the engine was reliable. No mechanical problems but I had a lot of pinging problems. It took a lot of tuning by me to get the pinging out and I got most of it out. It still pinged once in a while at WOT. I use an Edelbrock 750 carburetor and I have read very bad things about this carb on the Moparts forum. I did race the car (back then I had 3.23 rear gears) twice and it ran a disappointing 16.03 ET @ 93 MPH. The asterisks was I don't have a blow proof bell housing so I was kind of babying it off the line. A guy at the track told me that with my MPH I should be in the 14s. I don't know if that is true or not. In hindsight I wish I would have tried a different carburetor before trying the a different cam. You would not believe how many times I tried different jets and rods and it never seemed to make a large difference. Actually a long time ago I did try a Edelbrock 650 but the pinging was really bad. I wish I would have used the jets from the 750 in the 650. I wonder if the engine would have run better.

So after all these years I finally decided to try to get this engine to perform like it should. So I decided to change the cam. I installed a Comp Cams hydraulic flat tappet cam but something went wrong. I ran it for 13 minutes @ 2K RPM and it sounded great but I shut it down due to starting to overheat. The next day it wouldn't start and I found the damage. The cam/lifters got destroyed and I had a bunch of bent push rods and metal got sent throughout the engine. Still not exactly sure what happened but my guess is the pushrods were too long and the springs bottomed out. So that's why the engine is at the machine shop now. Charlie (machinist) is working with me every step of the way. He is going to make sure the entire is assembled properly and as long as I break it correctly this engine will run again.

And last like you Shaker Joe even though Plymouth never made a Barracuda Gran Coupe with a 440 I want to build my car as if they did. I run factory manifolds, factory exhaust (Accurate) , and I have a Passon Hemi 4 speed with OD and 3.91 rear gears.

I really like the way your car runs Shaker Joe and that's pretty much exactly what I am trying to do. What size and type carburetor to you use?

BriceRoad said:
CP, thank you for your response. Perhaps I didn't explain myself properly. Basically what Charlie told me is that if you have two similar cams in DUR and LSA but one cam has 10 or 20 thousands more lift, the extra lift isn't that important.

I want my car to run like Shaker Joe's car. I want it to look stock, pull hard, run cool, do a decent burnout and be reliable. As for the 1/4 mile I would be happy if it ran a low 14 but now that Raceway Park (Englishtown, NJ) is closed who knows if I ever will race it again.

At this point I feel buying an aftermarket cam is a crap shoot but the engine won't run without it so I think I am going to try the same Lunati cam as Shaker Joe. I was planning on using Lucas break in oil and zinc additive and then after break in running Lucas High Zinc motor oil.
Click to expand...

Not to throw more fuel on the fire, but my old cam was a Crower 282HDP, I sold it along with the Crane adjustable valve train and lifters and the torque converter...that cam ran real good in my old motor too...but I’m very happy with my Lunati choice.
B

Joe, thank you very much for your response. I would love to upgrade to a Six Pack but I don't have the funds right now. Too many other expenses. I hope my engine will run good with a single carb. I did order the Lunati cam.
C

Generally a modern 4 bbl on a good intake will beat up on 6 packs but the 6 pack sure looks cool !

street an casual strip racing i use solid cam with hrc derect lube tappets to have constant oil on lobes wit good stout springs you can get pretty close to the same hp compared to solid roller how ever you cant do this with hydralic cams . hydralic cams weather roller or tappet compromise to much lost in power an rpm
You must log in or register to reply here.
Share:
Reddit Pinterest Tumblr WhatsApp Email Link