Is my car worth anything?

Now I'm not thinking anything exorbitant here, just more valuable than average. So I've got a 74 'Cuda 360 4 barrel, completely stock. I know it is not the most desirable year but stay with me. From what I was told, not able to personally confirm, that this car is one of five built in 74 in this color scheme (Triple Green) and it is heavily optioned, 2 fender tags. So does color and small options matter or is it only the earlier big engined ones that are 'valuable?'

A 360 powered E body is kinda rare. Keep in mind that production was really low for 74 since they didn't produce a full year. Don't know the numbers but if you have a high optioned car with a 360 4 bbl, you have something that is pretty unusual but can't tell ya what it's worth without more info....
S

I`m no expert by any means but if your car is original has 2 tags heavilly optioned why wouldn`t it be valuable? Granted it not going to be as valuable as say a hemi. If you can confirm it`s 1 of 5 with that color scheme it would definatly add collectability to it. Out of the 5 maybe your is the only 1 left! I wouldn`t knock it "just" cause it`s a "74". Don`t believe all the hype that the 70-71`s get,awesome cars for sure but the 72`s to 74`s all have plenty to offer IMO.
Some collectors put down the later years lower compression,no hemi`s,oversized bumperetts, blah blah blah.That argument might be valid back in 72,73,74 when your buying it new off the showroom floor comparing them to the 70-71`s but not now.
Most of the cars that have survived are so far removed from being original it really shouldn`t matter.The ones that are still in original shape will have a premium over non-original or restored cars.

Oh yeah post some pics of your car and give us a list of the options it has I would love to see it!

I would like to see some pics too, sounds like a sweet car and it would also help to try and put a value on it.

Here are some photos... 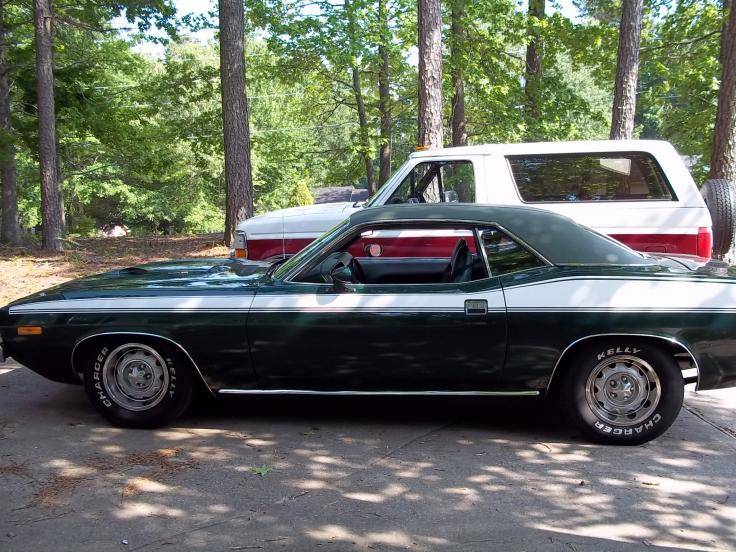 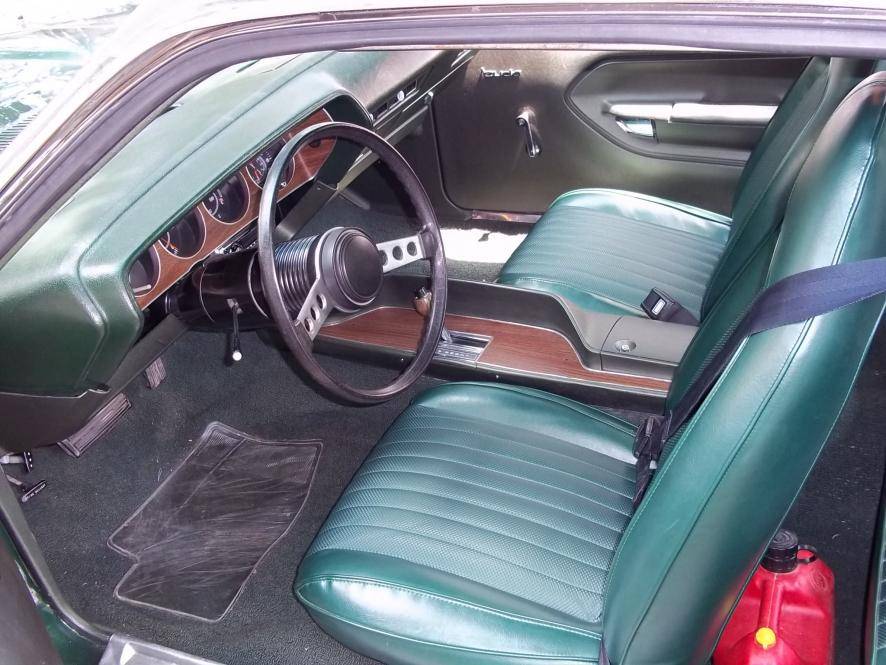 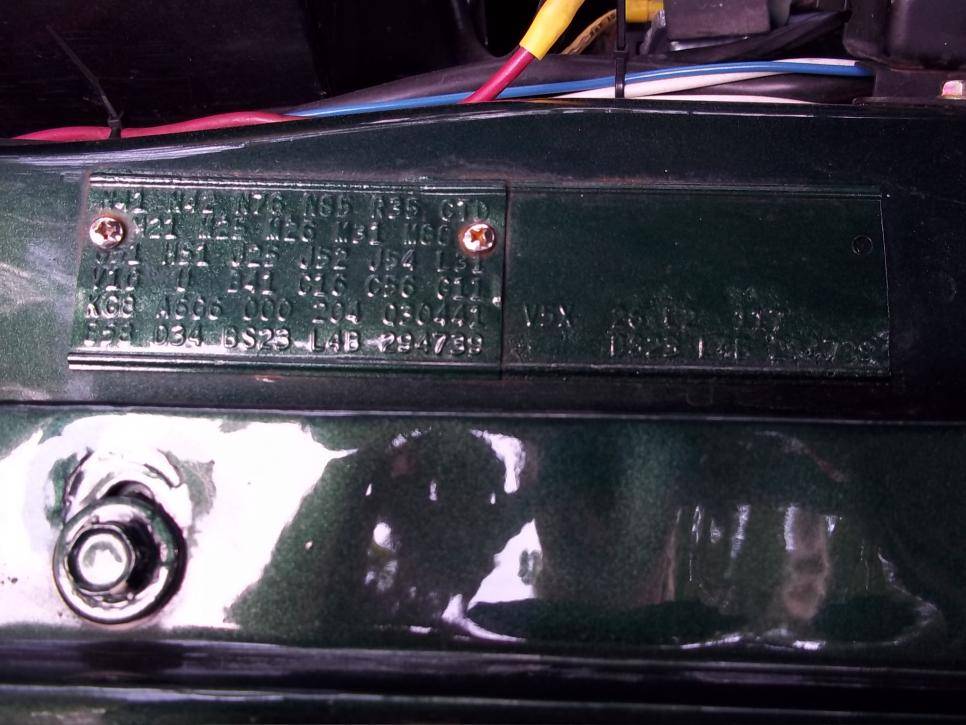 Wow it even came with the ultra rare 2 1/2 gallon driver side gas can!:smileinbox:


Seriously that is a nice clean looking survivor that anybody would be proud to own!

I like it, Green is my favorite color too.

Very nice car! and am sorry but I would have no idea what it's worth. You just don't see to many `74's as comps.

It's impossible to know how many cars were built in a certain color. Some records are available for the 70 and 71 model years but even then, it's only a % number.

I think the Hemi cars are the exception. Most of the Hemi E-bodies are documented...so color/trans breakdowns are known.

360 4-speed cars are fairly rare. However, 72-74 cars are not considered collectable by the very serious collectors. That keeps the prices down to what the avarage musclecar fan is willing to pay.

72-74 cars that are restored to stock condition...with every nut/bolt refinished correctly...top out right around $30,000. The rarity of the 360 4-speed might add a little money but not a whole lot. A 360 auto wouldn't command a higher price I don't think.
Y

Really nice and rare car you have there.
B

Based on the rarity and nicely equipped options, unusual color combo, originality and condition of your car, (judged as very nice form your pictures) I would put a market value of from $15000.00 to $20,000.00 on the car.

The E-body guys will love it and it will appeal to the folks looking for a great weekend show/cruiser who can't or won't step up to the high price demanded by the big block cars.
3 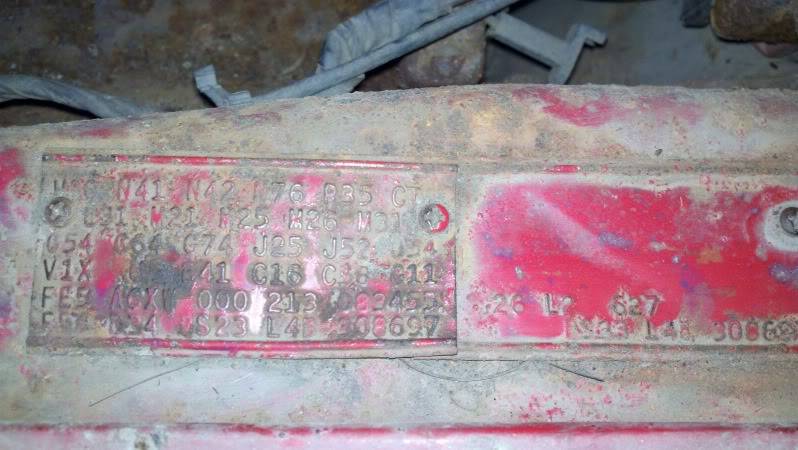 
That's just the SPD.(scheduled production date) That is the day the factory planned on building the car. Rarely was a car accually built on the SPD.

In late 72, the factory changed the VIN sticker on the door. They added a MDH code to the lower left corner of the sticker. MDH stands for month/date/hour. Since the VIN sticker was placed on the car twards the end of the production line, that is more then likely the day the car was built.

I have a 1974 Challenger(original owner) yellow with a 360 automatic also. These are the last of the breed and probably worth somewhat more than the 1972-73 models, more rare as well as more powerful engine.
I noticed your Cuda has the wrong auto shifter though should be a T handle.

Wrong shifter? hmmm, I may have to look into that... This is the great thing about forums, there's tons of information that I would have never known.
Thanks for all the responses.

Yup, I just looked at that too. The round knob was a 70 deal only and the shifter is different where the knob fits too so you can't just install the T on the 70 shifter stalk.
You must log in or register to reply here.
Share:
Facebook Reddit Pinterest Email Share Link