The red on red 70 Cuda project!

Best day ever for both of you.

moparker said:
Best day ever for both of you.
Click to expand...

I try have him help with any projects he can.

This is the first car I’ve had with no passenger side mirror. It only took backing it into the garage once got me to realize that was going to have to change. Pretty sure I measured 5x before I drilled the holes .
Painted the grill and buckets Saturday. Took a while to get the hang of the black round discs. They were dropping everywhere at first. But we got it figured out late last night. First time I had the in there I didn’t have the light harness in....luckily I only had 2 bolts in and not all of them.
I bought a new light harness and it has the connection for what I believe is the top of the fender turn signals which my car doesn’t have. Anyone else run into this and what did you do with the unused connector on the harness? Tape it up or plug it? 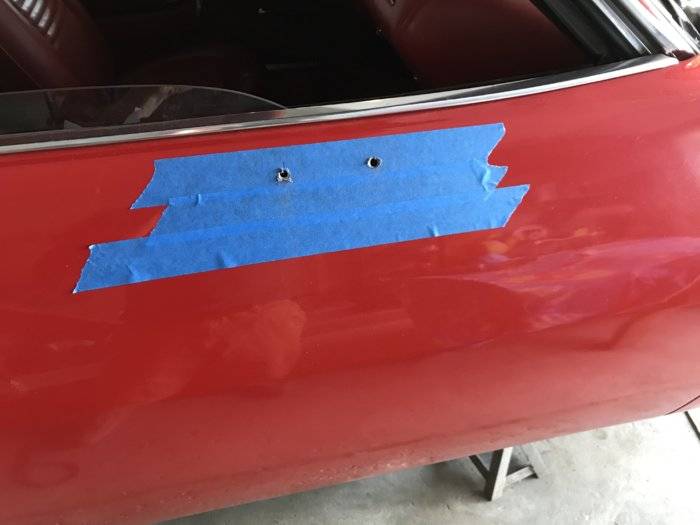 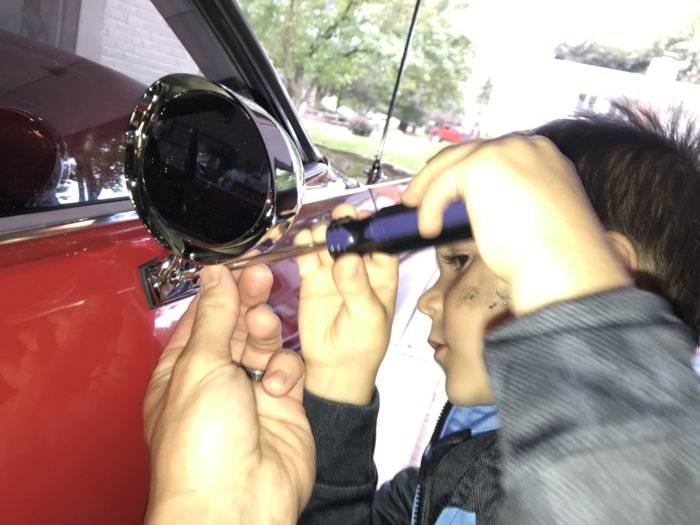 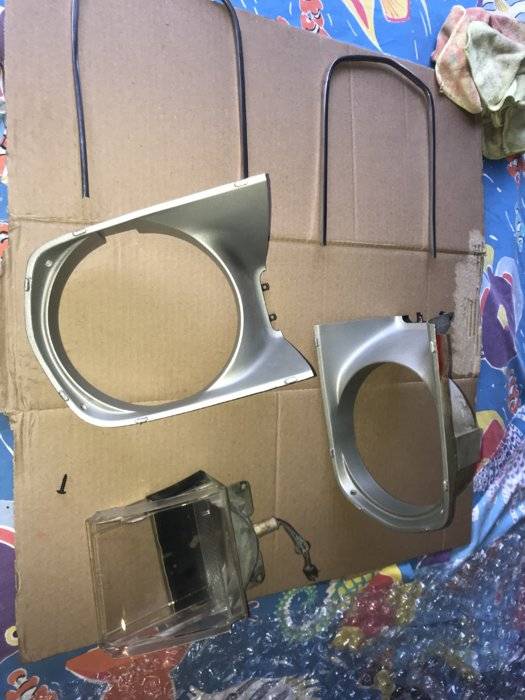 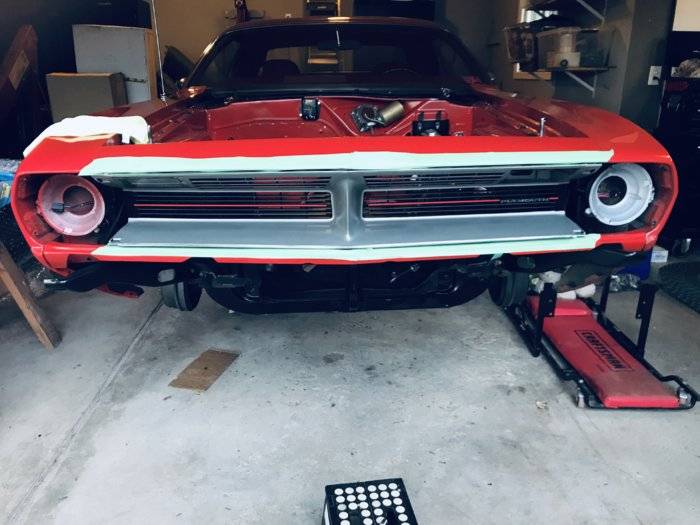 Its looking like a real car again! Front end is all on now. Put the hockey stripe back on the door. The guy I bought the car from had a new set so I didn’t have to buy those per se. The fresh air vent cables came in from RoaevilleMoparts and those are done now.
Next I want to work on the rocker moldings and start on the wiring harnesses in the engine bay. 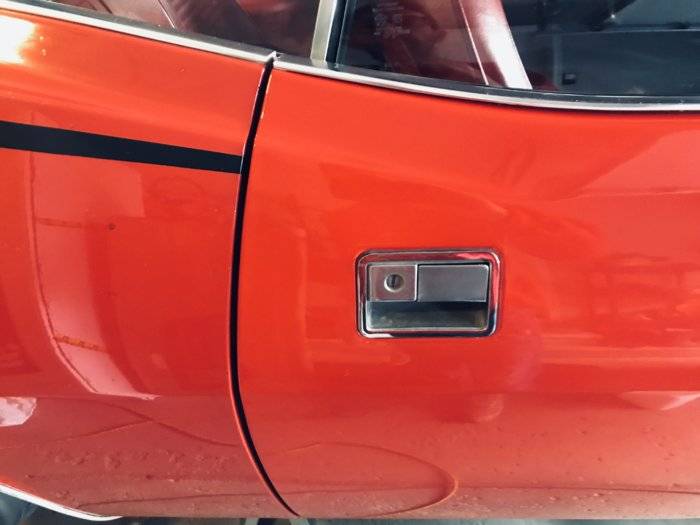 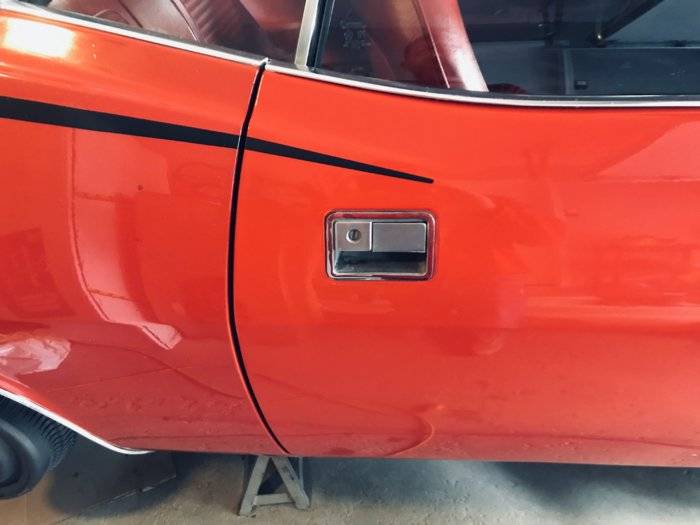 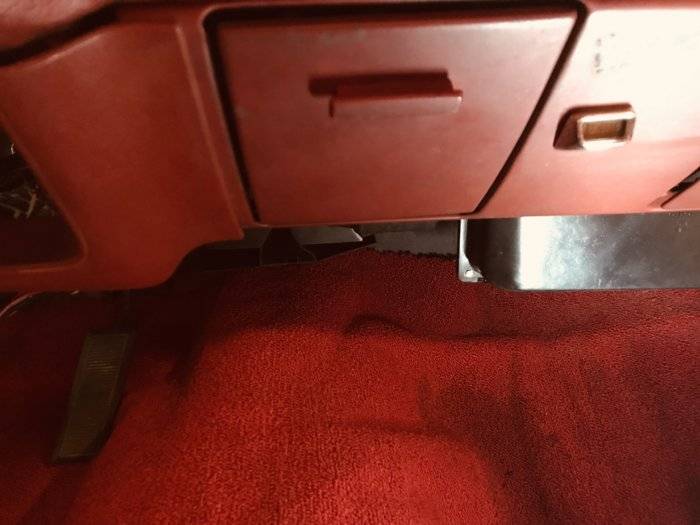 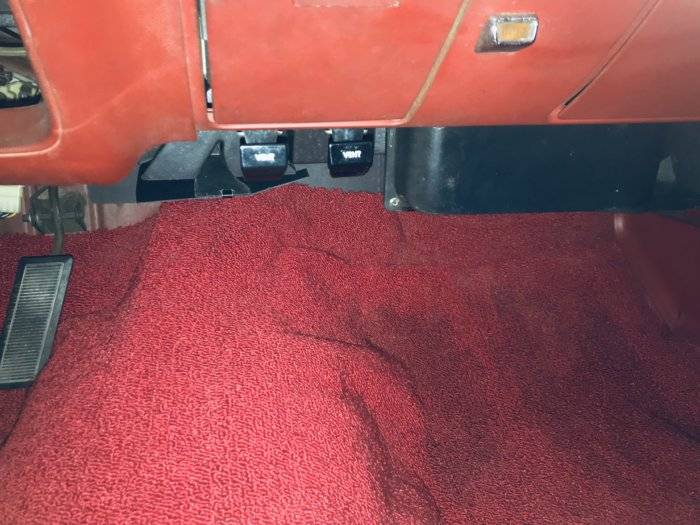 You are getting close Wayne

. Are you going to have it on the road before the snow flies?

moparlee said:
You are getting close Wayne

. Are you going to have it on the road before the snow flies?
Click to expand...

I think I am on track. The key will be not having any setbacks. The biggest tasks I have to get it ready to run is:

wayne, you probably know already; just in case you need it!

Yes, thats the diagram I found and plan to follow thank you! I just need to look at my manual and figure out which wire it is in the bulkhead and how I want to go around the factory bulkhead connection.

No room for error on this one!

Mad electric did a pass through directly through the firewall bulk head connector by drilling out the original location.

I will be looking at also doing this conversion.

Decided to tackle the rocker moldings next. One is a repro. and one is original. Decided to paint them both and needed to do a small repair on the orignal. The repro's have a lot of texture molded into them vs. the original one I had. Took about an hour to mask off each one. Wasn't too bad...i have had much less enjoyable projects thats for sure. I am pretty happy with them.

Also made another video. This video is a little different. I wanted to show more detail and go over all the steps I did. Let me know what you think if you watch it. 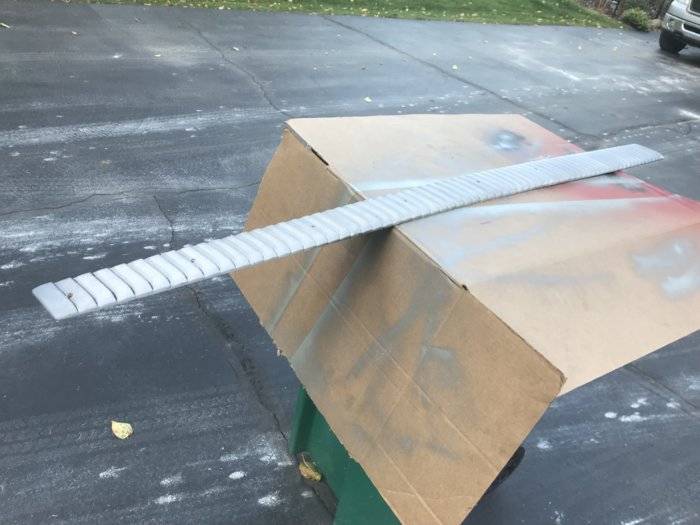 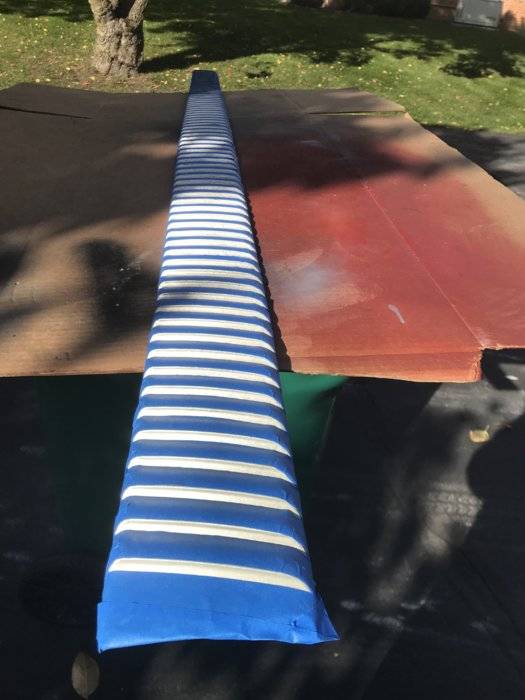 I am going to run a MSD ignition and distributor in the car but didn't want' to mount it in the engine compartment. A few factors drove me to the MSD brand. The engine builder highly suggested the distributor. Its fairly common if I ever need replacement parts. They are all designed to work together as well. I have seen a few pictures online of guys getting creative with hiding it. After a lot of time looking at every possible spot I decided on under the dash behind/above the vent cables. There was enough room with a creative yet simple bracket.

I wanted a pretty solid mount so i chose .080 aluminum sourced from Amazon actually. I was also able to use existing holes in the dash for mounting. This was another place I could use the Rivnut tool and use those to secure the ignition box to the bracket and the bracket to the dash. This would allow easy installation and not fight with nuts and washers when mounting lying on my back. I don't have any special tools but I am pretty happy with it. Started with a simple cardboard template flat pattern.

I will do the wiring later once the engine is in the car. I have a couple existing holes in the firewall I could use. One being by the master cylinder for the washer pump that is not being used and has a plug. 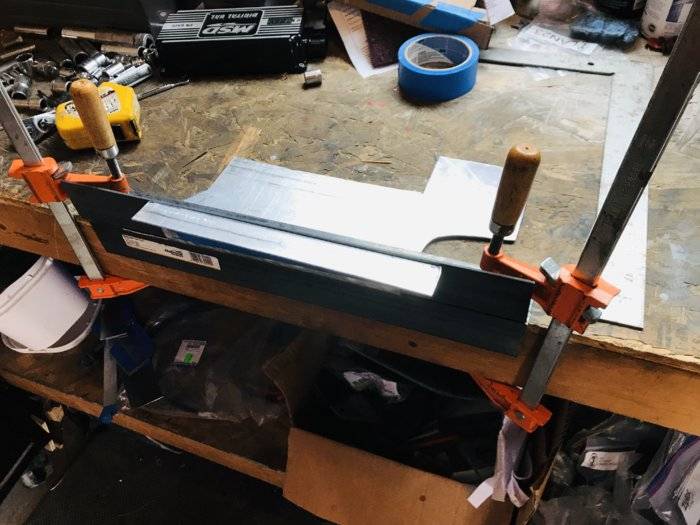 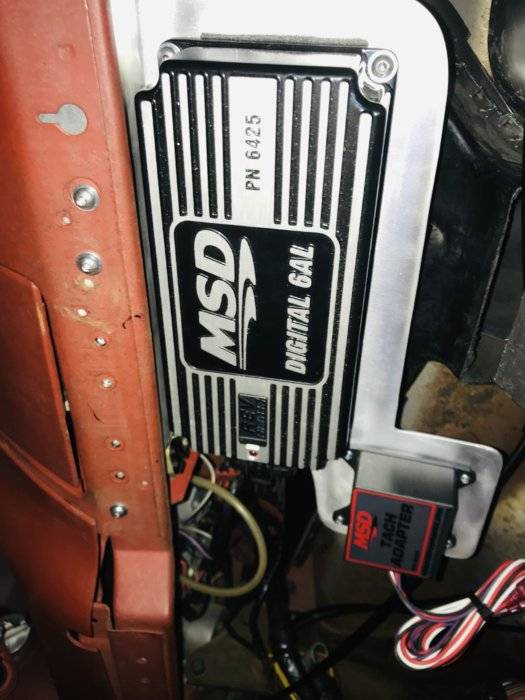 The Project is really ramping up now with the arrival of......her heart is home!! :banana:

Picked it up last Friday. Was great to hear it run finally. Best machine have been great to work with. They always answer the phone, up front and honest people. Very impressed with their knowledge and attention to detail.

Plan is to install it this weekend :wrenching: 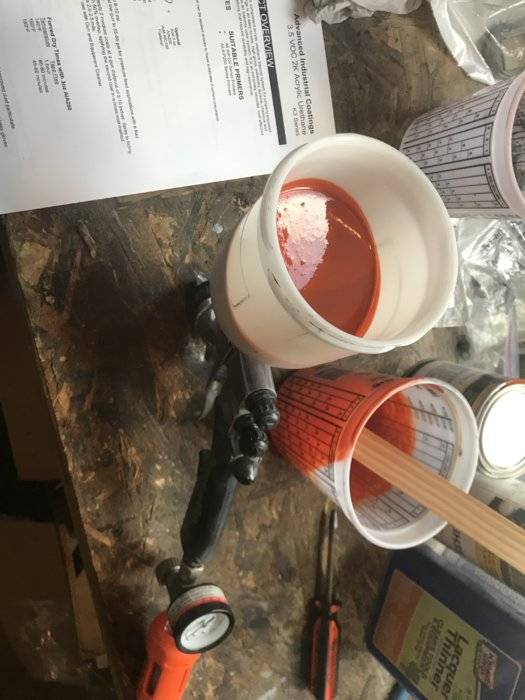 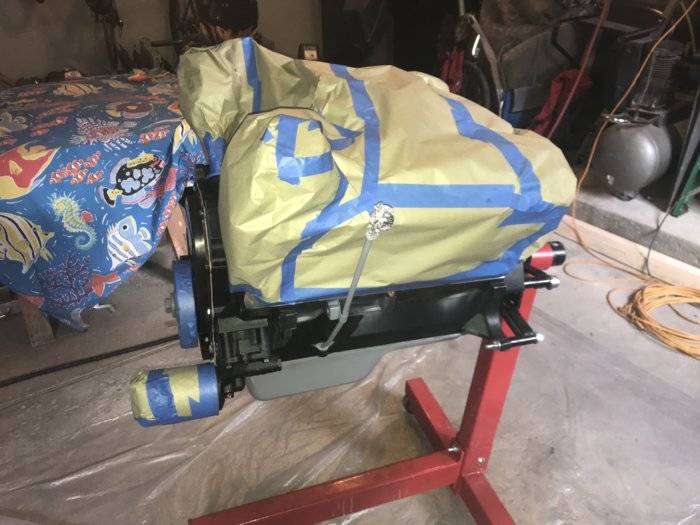 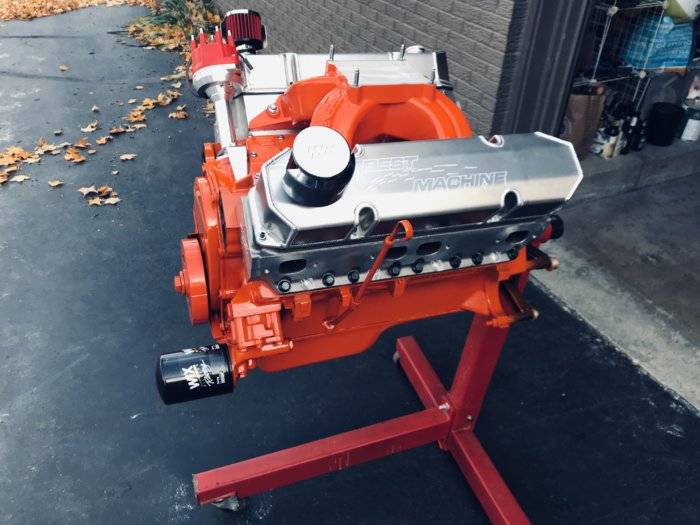 Thanks. When I saw them I had to have them. They have thick flanges and seal up great. They are Not made in house.

Looking good , that’s where I mounted my MSD box too

rbbruno3 said:
Looking good , that’s where I mounted my MSD box too
Click to expand...

I have two big updates!

My friend had Friday off work so I proposed I take the day off so we could focus on the getting the clutch, trans and engine together and put in.

I ended up going with the McLeod RST twin clutch. I had a twin in another car and loved it. I like the fact that it has a lot of grip and light pedal pressure. Going this route I shouldn't need a hyd. throw out bearing. I also used the McLeod flywheel.

It was a long day had a few obstacles but got through them. We tried to bolt the trans up after the bellhousing was bolted to the motor. It just wasn't working. So we unbolted the bellhousing and bolted it to the trans and was able to get it all assembled in that order. It was a tight fit with the trans but we were able to get it in and didn't scratch up any of the fresh paint...on the engine or engine bay! It feels so good to get to this stage and I love how the engine is looking in the bay. Although the orange engine in a red engine bay is still growing on me lol

The next big update is on the trans side. I have always wanted to have an overdrive but my motor would be too close to the torque limit of the 5speed by Tremec and the 6 speed required cutting the floor which I wouldn't do. Plus I really wanted to keep my original trans. After talking to Gear Vendors I decided to give them a try. They have a tail shaft housing that bolts to the 4 speed and only required some clearancing but no cutting of the tunnel. Plus they have a very high hp limit so I won't ever have to worry about reaching its limitations. It is activated by a switch that is on their custom pistol grips that go on the stock shifter. Pretty slick. Whenever I want my o.d. I hit the button. Or...I can use it to split any gear I want for a clutchless shift.

The whole assembly is about 13" longer so I just got off the phone with Dynotech and am going to have a driveshaft made that is shorter than my existing and fits that package. 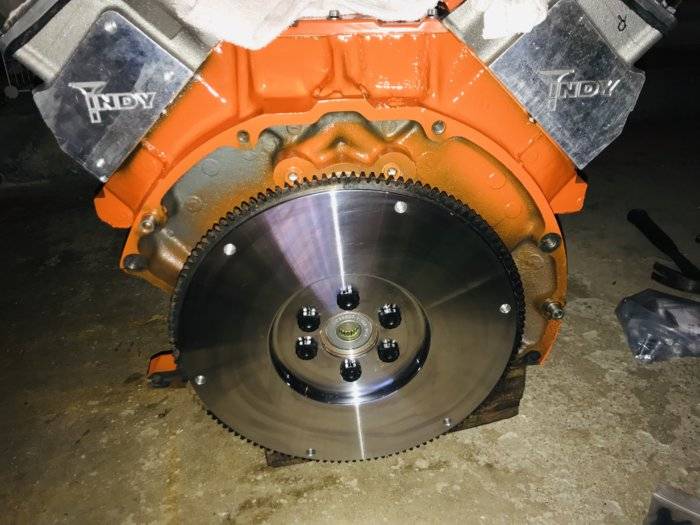 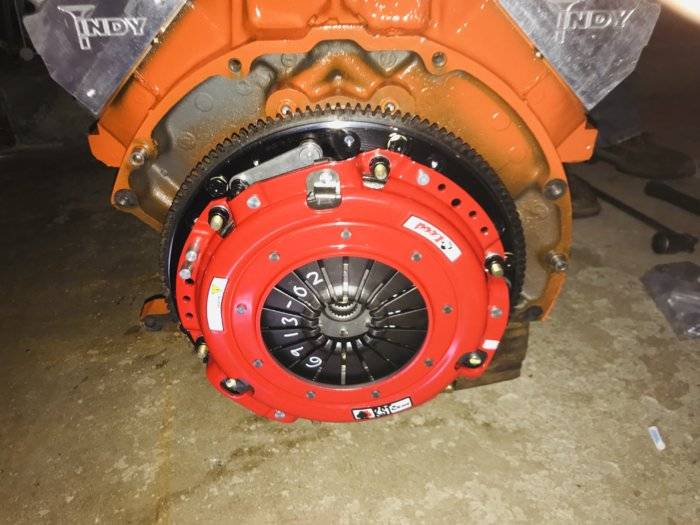 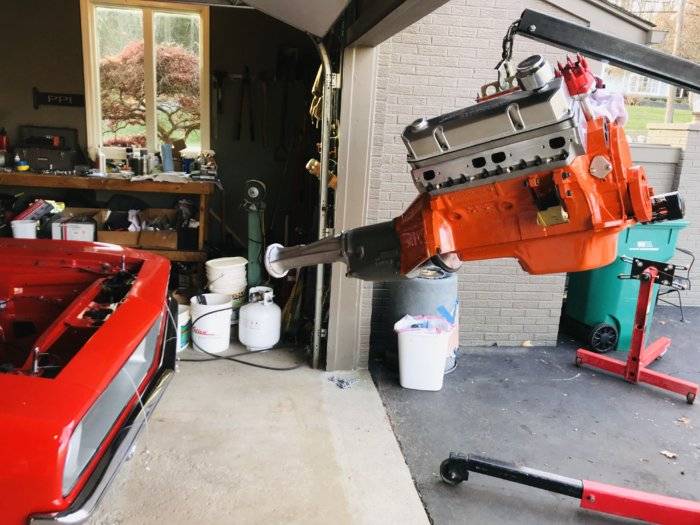 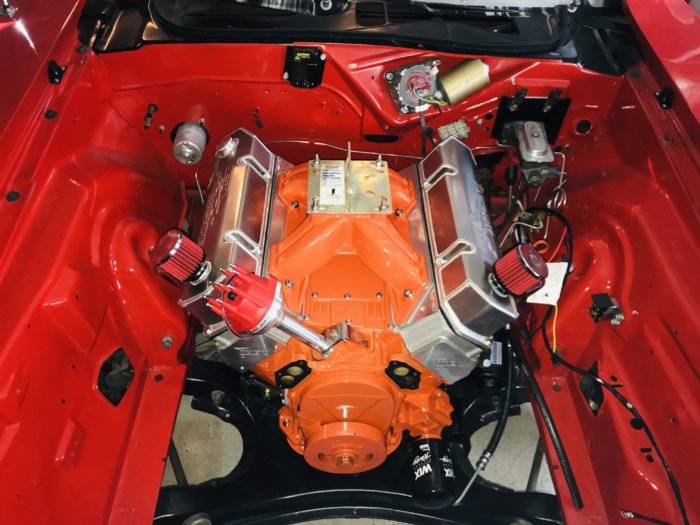 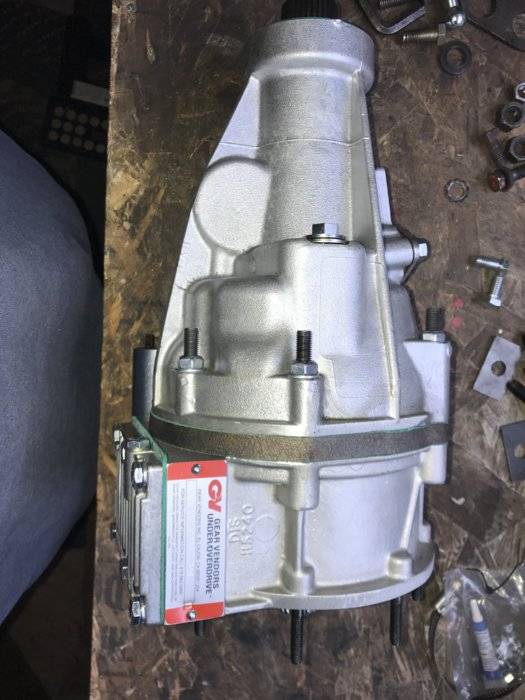 The bad news is we got blasted by a snowstorm a couple weeks ago ...a good 10”. Good news is it warmed up last week and it’s all gone now.

Got the clutch fork in and adjusted. Z bar is in. Pinned the shifter in neutral and got the shift rods installed. Put MT 90 in the trans. 1-4 feels great. Reverse seems a little tricky to find but I’m still new to the 833. Clutch pedal effort feels pretty good. Not as heavy as aggressive 3 finger clutches I think I’m going to be pretty happy with the pedal effort
Started putting the front of the motor on. Water pump housing, pump, t stat, crank pulley and power steering pump.

Going to find some time this week between turkey dinners and get the fuel lines routed. Just got the driveshaft and need to check my driveline angles.


Happy thanksgiving to all! 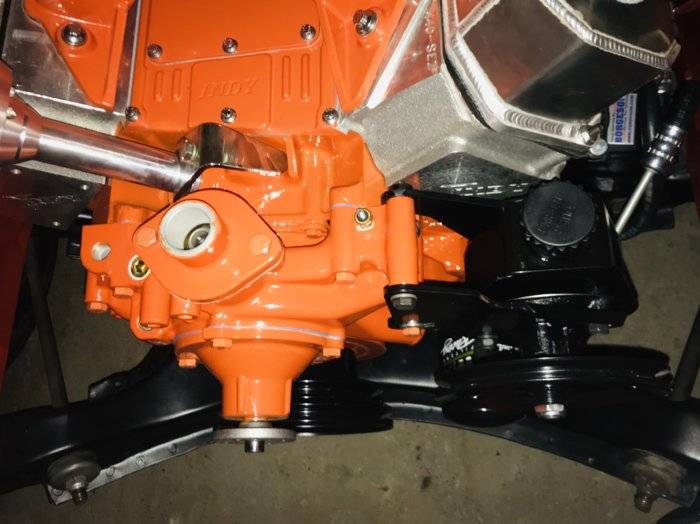 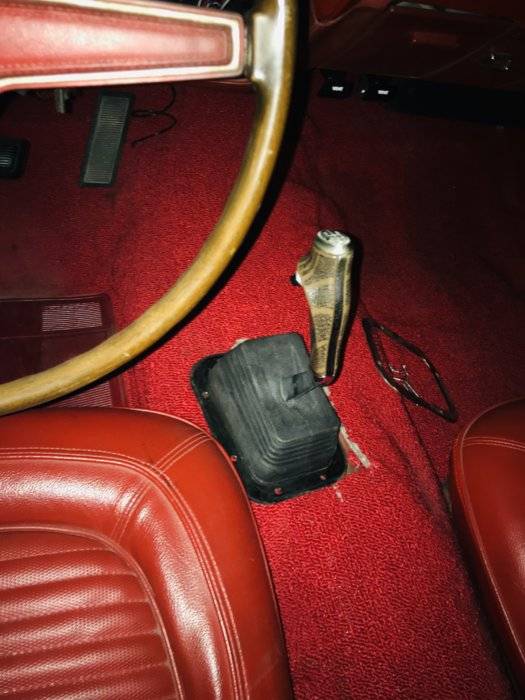 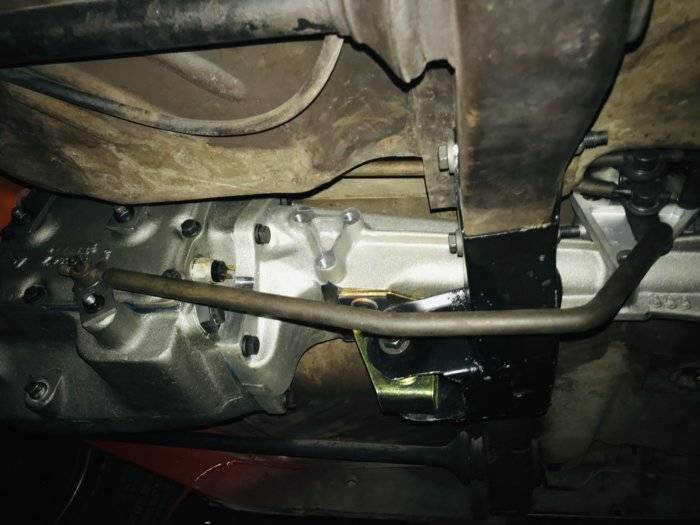 wayne said:
Nice, can you hear it at all. Someone told me they could hear the tach adapter and had to move it. Think I will just move the tach adapter now rather than deal with it later.
Click to expand...

I can not hear the tach adapter in my car. Are you sure you even need it? Mine didn’t work after everything was together, that’s why I bought one. Come to find out after trying this and that I called instrument Specialties . They told me to see if the needle was stuck to the peg from painting. Bingo worked fine , so I never tried it without it.
Last edited: Nov 28, 2019

rbbruno3 said:
I can not hear the tach adapter in my car. Are you sure you even need it? Mine didn’t work after everything was together, that’s why I bought one. Come to find out after trying this and that I called instrument Specialties . They told me to see if the needle was stuck to the peg from painting. Bingo worked fine , so I never tried it without it.
Click to expand...

Quite positive I will need the adapter with the stock tach. Only time I’ve heard of people not needing it with the msd ignition is if the tach was rebuilt with modern components

Since the GV is powered by a switch I wanted to hide the wire the best I could. Decided to mill a .125 x .125 channel in the front of the shifter for the wire to sit in. Then some clear silicone to hold it in place. Came out pretty slick


Hoping this weekend I can finish routing my fuel lines. I’m about half done but needed a few different fittings so I have been waiting on the delivery man. 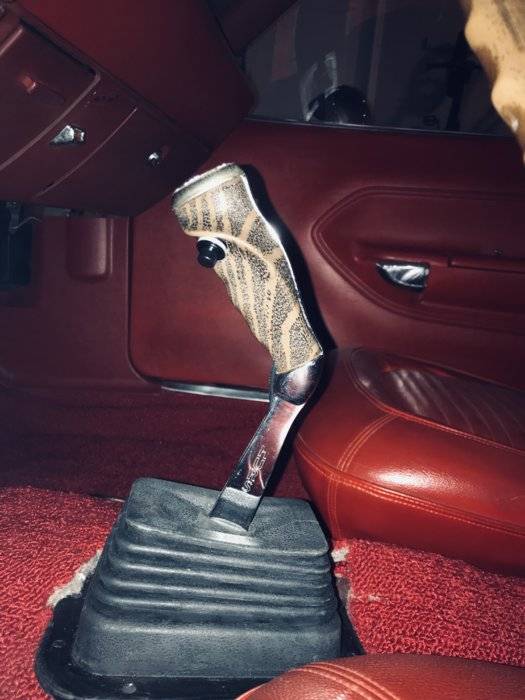